Glasson Dock was built in 1787, and has had a long and varied history and although its peak as an industrial port has long past, a limited amount of commercial traffic still uses the dock, with outbound shipments, including coal for the Isle of Man and the Western Isles of Scotland, and incoming cargoes including animal foodstuffs and fertilizer, which are stored in the sheds located on the dock side.

However, whilst the dock is no longer as busy as it used to be, the weight of modern freight has been impacting on the site, the increased trafficking, as well as greater loads from the modern haulage causing the concrete slabs to sink across the site. Almost since the dock’s construction, the area has been backfilled with a variety of materials, including greenheart timbers, which are unable to support the weight and frequency of traffic of modern haulage. As a result, the dock area required treatment to improve and stabilise the soils to extend the life of the dock, without the need for major construction works and without interruption to the day-to-day workings of this busy freight yard.

Options available to the dock were limited; the main alternative being to utilise a full breakout system and replacement, which would have taken many weeks to complete as well as cost much more. It would also have caused considerable interruption to the working of the site, with the economic downside through reduced operations that would have brought. However, Consulting Civil and Structural Engineers R.G. Parkin & Partners Ltd, familiar with the work of Geobear, recommended its solutions to the dock owners. 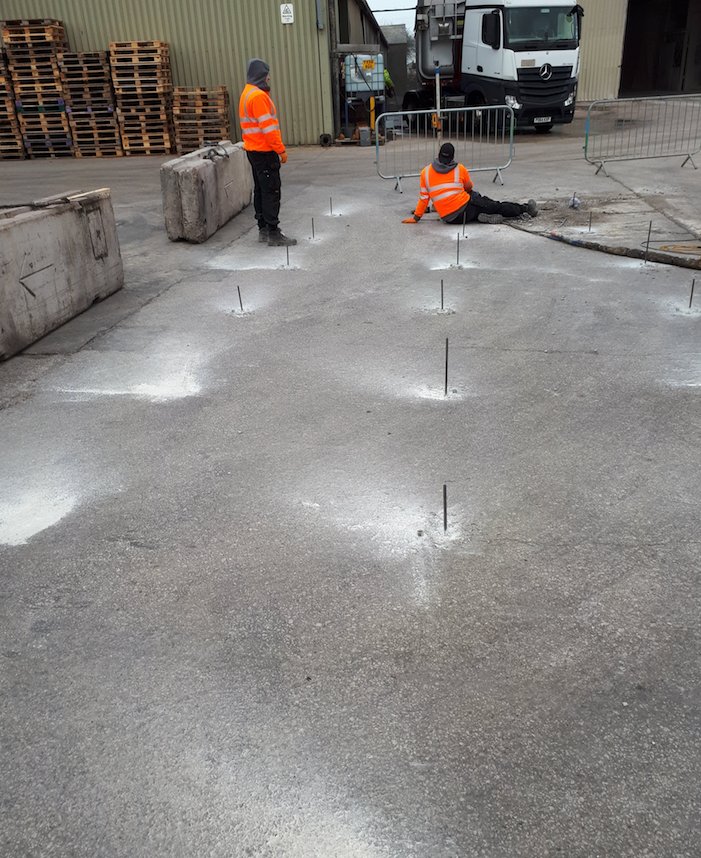 Given the alternative remedial options for the site, Geobear’s solution was vastly more appealing, from both a logistic and economic perspective. Its geopolymer solution being able to stabilise and improve the soils below the concrete slabs effectively and more importantly without interruption to the site’s operations.

The solution offered by Geobear was also ideal for overcoming localised issues, such as the high-water table that would have hindered, if not prevented, the use of any wet concrete options. In addition, given the potential cost of a full breakout and replacement approach as well as the time it would have taken and the impact it would have had on trading, Geobear’s solution was an extremely economical proposition.

Geobear’s solution was to inject its specialist geopolymer below the concrete slabs at specific points across the site, which acted to stabilise the ground and bring about the necessary slab lifting. A specific geopolymer material was chosen due to the high-water table; it can stop the product becoming buoyant, allowing it to work to depth and stabilise the soils.

The project took just one-day to complete, with Geobear successfully achieving the desired result of stabilising the soils and providing the additional support for the area’s concrete slabs.

Please use this contact form or navigate to the contact us page and send us a message. We will respond to you within 24hrs.

Alternatively please call us on 0800 084 3503 and speak to our customer services team. Calling from Ireland please go to the contact us page.

We deliver projects on any sort of building or structure – from conservatory extension problems to 80,000m2 warehouses and road infrastructure. In most cases we will have the best solution, so get in touch today.