Working for Berkeley Homes, Geobear were approached to provide a solution to strengthen the foundations beneath the Royal Arsenal Brass Foundry Wall. 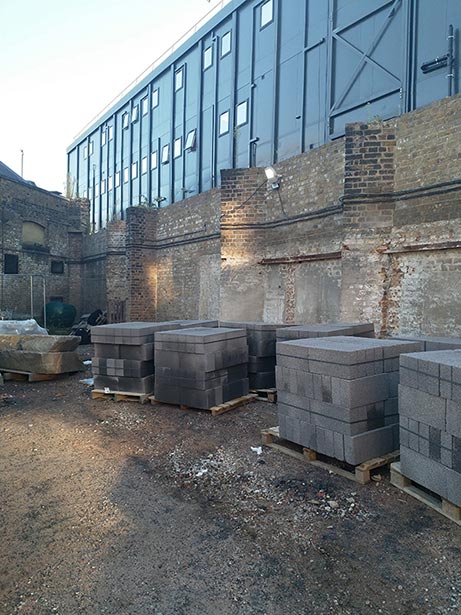 The wall is historically listed and sits within the confines of a new development in the Royal Arsenal Riverside Development. The development is situated on the site of the historic Royal Arsenal Brass Foundry whose origins date back to the 17th century and were used for armaments manufacture for the British armed forces. During the First World War the site was used extensively and employed 80.000 people.

Today the site is being redeveloped, however a ground investigation by Tweedie Evans Consulting discovered that the foundry wall was not structurally stable following the removal of an existing concrete bunker. Specifically the ground beneath the existing foundation was not considered suitable to provide the requisite bearing resistance of 97kN/m2.

The conclusions from the ground investigations indicated that enhancement of the existing foundations would be necessary and ground treatment was recommended due to the sensitive nature of the wall and presence of services in the area.

We were selected for the project due to the speed of our solutions. The process for a geopolymer solution can be up to ten times faster than alternatives such as underpinning due to the absence of excavation. This enabled the client to minimise delays to the program of works which ensured the delivery programme could be adhered to. Additionally, with the Geoebar system there was a lower risk to damage to the existing wall as we were not having to dig out and expose the existing foundations.

Geobear were contacted to strengthen the ground beneath the foundations. The wall foundations varied between 0.6m and 1.1m in depth and are 1m wide, we were required to treat the soils beneath 1.8m, the depth where the competent ground can provide an allowable bearing pressure of 100 kN/m2.

Our solution would involve injections of geopolymer material at a depth of 2.2m at 1m centres throughout the length of the wall. On injection, our material expanded in the soils beneath the foundation, filling voids and binding with existing fill to provide the reinforcement needed to achieve a bearing requirement of 100kN/m2.

We treated the 27m metre wall with two teams over five days and injected material at 28 points beneath the wall. The process saw our teams drill 14mm holes to a depth of 2.2m and insert steel tubes by which our material was introduced to the required locations.

A predetermined volume of material was them pumped through the tubes from our on-site mobile units. The wall was monitored real-time to ensure no movement was found during the process and dynamic cone penetrometer tests were conducted post injection at designated points to ensure load bearing and been achieved.

The project was successfully delivered within the timescales and the site handed back to the client to proceed with the development.

Following concerns expressed by Hurst, Pierce + Malcolm that the Brass Foundry Wall required stabilisation Geobear successfully treated the 29m stretch of wall at our Royal Arsenal Riverside project on within just 4 days. As programme was tight I was  delighted with the speed of this operation, that also represented a significant cost saving especially once you considered the cost of the prelims that Berkeley Homes would have done had we used the traditional method of underpinning. From inception through delivery they were highly professional and the result is exactly what we required.

Please use this contact form or navigate to the contact us page and send us a message. We will respond to you within 24hrs.

Alternatively please call us on 0800 084 3503 and speak to our customer services team. Calling from Ireland please go to the contact us page.

We deliver projects on any sort of building or structure – from conservatory extension problems to 80,000m2 warehouses and road infrastructure. In most cases we will have the best solution, so get in touch today.